04 January 2021 The entrance to Harlan Levey Projects is an anonymous doorway on the ground floor of an apartment building on a mostly residential street outside the center of Brussels. It would be easy to overlook. From the entrance of the gallery, what could be seen of Marcin Dudek’s “Slash & Burn I” was a wall with a densely packed grid of abstractions, each so small and understated that the one thing that could be immediately determined from the gallery door was that they eschewed heroics. (A sequel, “Slash & Burn II,” is scheduled for 2021.) 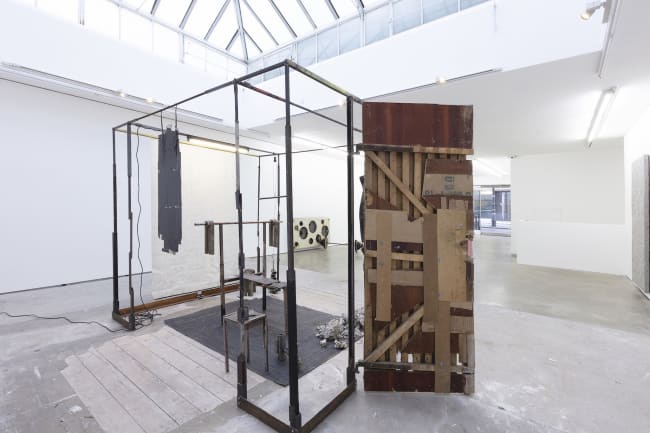 Very original work induces a particular kind of hesitation, a feeling of neither/nor that allows it to slip through the net of instant categorization and that at first confrontation appears unintended, as if the work had applied for membership in a familiar category and failed. One indicator of significance in such art is that this accidental appearance will, with a little attention, reveal itself to be the product of an internal logic. In the case of Dudek’s piece, the imagery was only at first glance abstract. Getting closer, one saw recognizable figures pushed to the edge of decipherability, like ghosts caught within an ikat weave. Parts of the image looked as if they had been passed through paper shredders and reassembled, like documents rescued from the archives of fallen dictatorships. The horizontal strips also evoked the transmission and tracking errors of the analog technologies of not so long ago. As one stepped back again, the array of colored rectangles recalled a bank of television screens.

These abstractions were derived from archival images, police tapes, photographs, and television footage of the Bradford City stadium fire of 1985, a blaze that broke out in the midst of a soccer match in a depressed industrial town in the north of England, resulting in a stampede in which more than fifty people died. For Dudek, who spent his Polish adolescence as an active member of one of the skinhead football gangs that formed in the shadow of the collapse of the USSR, the British catastrophe served as a kind of mirror to his nihilism. Some of the Bradford City fans allegedly cheered on the fire that was engulfing the stadium in which they sat.

Dudek made the grid of images, an exploded diagram of the doomed stands, by reworking the archival material, either transferring pigments from printed stills using solvent and glues or printing directly onto medical tape and then cutting the material into thin strips, as if to make it emulate the sweep of the cathode. In one small panel, I imagined I saw again the unforgettable footage of a British policeman, helmetless and in uniform, his hair a flaming torch, as he fled the stadium on foot behind the last civilians able to run.

Hidden behind the wall of reworked images was an improvised bodybuilder’s gym, Akumulator, 2013–18, with a bench press whose barbell is weighted with cut-up pieces of a cast-iron radiator, and whose punching bag, savaged too hard once too often, has disgorged its paper stuffing all over the floor. Dudek says the gym is a one-to-one replica of the training room he built in Krakow in the 1990s. His father died from throat cancer acquired while repairing shoes in the damp basement of the apartment block, tying to keep the family afloat. Dudek and his former-thug friends converted his workshop into a training room. Hidden in the same basement that had consumed his father, they sculpted their muscles and waited, looking for another way out.