Hurrah - our museums and galleries are now open to the public - but sometimes we don’t have more than half an hour to spare, and with social distancing still in place for at least a few more weeks, trying to book tickets for strict time slots can be frustrating, especially when everyone else has the same idea. 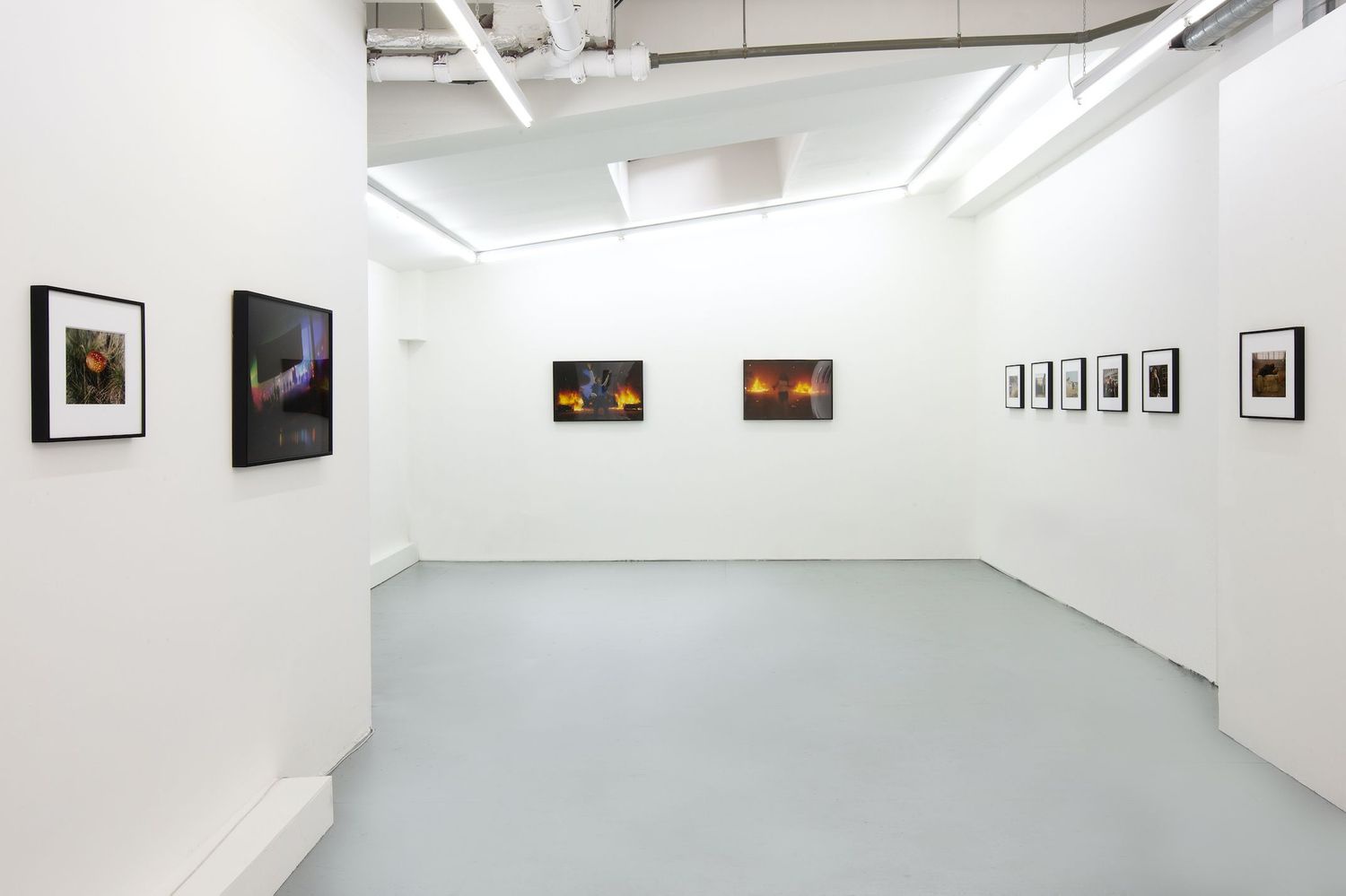 It’s easy to forget as you walk past their sleek, sometimes unwelcoming facades, but London is packed with galleries you can a) visit for free, b) whizz round in a few minutes (can I say that?) and c) often do so without a booking. The city’s commercial gallery scene (if that’s an annoying phrase that nobody’s ever explained, that’s a gallery like White Cube or Gagosian where the art on the walls is for sale and the security is quite often tougher than at the Tate) is one of the best in the world and more galleries are opening all the time, with Peckham and Deptford the most recent growth-spurt spots.

Which is why it’s quite weird, when you think about it, that there’s never been a London Gallery Weekend before - Berlin has one, Paris has one but here, this weekend, June 4-6, is the first. With each day focusing on a particular area of the city (Friday is Central, Saturday is South and Sunday is East London), more than 130 contemporary art galleries will be participating, with late opening to 8pm on their focus day and exhibitions featuring both established names and emerging talents alongside a public programme of discussions, studio visits, children's events and performances.

If that all sounds a bit exhausting, LGW have partnered with the ride-hailing app FREE NOW to offer an exclusive discount of 30 percent off five trips over the weekend, while the e-bike provider Lime is offering LGW attendees free rides to travel from gallery to gallery (and encouraging you to donate the saved cost of your journey to The Felix Project).

Details of all participating gallery exhibitions will be available at londongalleryweekend.art, along with curated walking tours, but here are some of the highlights.

Bringing together a collection of diaristic photographs, this solo exhibition documents the artist Vinca Petersen’s experiences as part of the free party and traveller community in the 90s. As euphoric as they are edgy, they’re a fascinating glimpse into an edgeland of society - mainstream and yet miles away from it.

Lost in Italy at Luxembourg + Co.

This historical group exhibition curated by Francesco Bonami focuses on the key role played by Italy as a site for international artistic exchange during the golden age there of the 1950s and 1960s, which features works by Francis Bacon, Alberto Burri, Alexander Calder, Marcel Duchamp, Lucio Fontana, Yves Klein, Man Ray, Salvatore Scarpitta, Richard Serra, Cy Twombly and more, and a new sculptural work by Maurizio Cattelan on the front of the building.

The Ugandan artist’s first solo exhibition in the UK brings together large-scale ceramic works, striking wooden sculptures and masks formed from debris found on the streets of New York alongside vibrant paintings on paper, to explore LGBTQI identities and the harsh realities of being gay in Uganda and Africa in general. Hard-hitting but beautiful.

This is the first UK exhibition in 50 years of the work of the American abstract painter Paul Feeley, a significant but rather overlooked figure who broke with abstract expressionism early in the 1940s to focus on the things he found unforgettable, the things “which made no attempt to be exciting” which is impressively withering shade to cast on the likes of Pollock and Rothko.

Alicia Henry: To Whom it May Concern at Tiwani Contemporary

The first ever exhibition in Britain for the American figurative artist Alicia Henry, whose mixed-media sculptural work draws on her own memories, African masks, paper-dolls, European clowning traditions, American minstrelsy and everyday life and events to both attract and repel in equal measure. Really fascinating stuff.

Ahead of the brilliant textile artist Sheila Hick’s first major solo museum exhibition at the Hepworth Wakefield later this year comes this exhibition which includes a series of new works made in her Paris studio during recent lockdowns and focusing on her relationship to music. Yes they are gorgeous and tactile, no I do not recommend you stroke them.

Of course he’s best known as a filmmaker (and artist’s home-maker, for Prospect Cottage in Dungeness) but this show focuses instead on Derek Jarman’s paintings, bringing together a significant group from 1982-92, which offer an insight into his interests (especially alchemy and 17th century metaphysics, as well as the politics of 1980s Britain) and his own personal history.

This year’s Prix Marcel Duchamp winner Kapwani Kawanga presents new sculptures and installations made from materials including ceramic, metal, gold leaf, embroidery, textile and mirror at this outpost of the excellent South African gallery, harnessing story and myth to explore ideas of history, power and resistance. Captivatingly multi-layered (worth reading the crib sheet).

Tala Madani deconstructs and satirises gender norms, using a biting and uncomfortable wit that combines repulsion with pathos and intimacy with the revolting. For her first UK solo show in five years, Madani will present new paintings from her Shit Moms series, which depict distorted female figures who seem to be made of... well, you guessed it. The show also includes Madani’s first Shit Mom animation, which makes Mr Panky the Christmas Poo look like a mince pie. Horrible and fascinating. Another sister exhibition of her work will inaugurate the gallery’s new space on Savile Row next month.

Bridget Riley: Past into Present at David Zwirner

Everybody loves a bit of Bridget Riley, as the popularity of her recent major Tate exhibition showed - this is a presentation of new works from the 90 year-old artist, from her current series, Measure for Measure and Intervals.

A book, Be Like Teflon (part transcript, part cookbook, part collection of essays), and a film, Ethnoresidue, are the central focus of the Glasgow-born artist’s first solo exhibition in London, uncovering the untold stories of Indian women living in Britain using research undertaken at the Glasgow Women’s Library, and conversations with Kaur’s grandmother. Unseen, unheard, now revealed.

The artist, singer-songwriter, experimental composer and producer from South London Klein presents her first exhibition at the Vauxhall gallery, comprising a series of new video works. Whatever’s in them, they’re bound to be intriguing.

This is the French-Arabic artist, poet and writer’s first solo show in the UK. All his work derives from text and language, but here it manifests itself in a new series of sculptures focused on the question of how people and groups defend themselves. Displaying influences ranging from TV show soundtracks to Xena Warrior Princess, his work is witty and weird in equal measure.

A new installation by the London-based artist, this is the the latest iteration of Lovelace’s Living Pictures series, in which photography and performance collide. Performers will activate the installation and photographic works presented on the floor as reflective pools encouraging quiet contemplation.

Jade Montserrat: In Search of Our Mother’s Gardens at Bosse & Baum

The artist’s first exhibition with the young Peckham gallery is of gorgeous, intricate new works on paper and takes its title from Alice Walker’s text, which focuses on Black women’s bodies as shaped and ravished by a legacy of an inhumanity, and suggests the garden as a tenet of creativity towards healing.

Bold, dynamic paintings, tapestries and mixed-media works by the Egyptian-born artist reflect in layers and layers of signs, texts and symbols his four decades of diasporan existence. As a lover of music he weaves in visual melodies you can almost hear.

Nicholas Pope: Take Off at The Sunday Painter

Alongside the British painter’s series of 'helmet' sculptures and drawings from the 80's and 90's, this show focuses on a recently completed body of work in the new medium of deep pile carpet, which lends itself fabulously to his wobbly, colourful drawings. Coincides with two other major exhibitions of Pope’s work at the Holburne Museum, Bath and the New Art Centre, Salisbury.

Christopher Hartmann: In and Out of Touch at Hannah Barry Gallery

Tenderness, distance, eroticism, alienation, intimacy - all are brought to play in Christopher Hartmann’s strange, flat paintings that explore the contradictions within our relationships. Their inherent artificiality nods to the filters of social media - an increasingly important tool of communication and miscommunication.

A typically beautiful show by the artist in her first show at the gallery, which continues her ongoing investigation into the interaction between colour, light and form and how this operates within both two and three dimensional space. This new body of work shows her shifting her precise minimalism towards a new exploration into the amorphous and uncontained.

Shannon Cartier Lucy: Cake on the Floor at Soft Opening

“Like Norman Rockwell meets David Lynch” is how the American artist’s work has been described, and if that doesn’t make you want to see it I don’t know what will. This is the painter’s first solo exhibition in the UK, and her weird figurative scenes have a whiff of the surreal about them (perhaps not surprising since she has a masters in psychotherapy). Fascinating and fun.

This glorious show focuses on a series of portraits by the great American photographer, in which he captured drag and avant garde performers backstage at New York theatres and nightclubs during the 1970s and early 1980s. Applying makeup or in full drag, these are playful, pensive or concentrated moments of transformation.

Yayoi Kusama: I Want Your Tears to Flow with the Words I Wrote/Chantal Joffe: Story at Victoria Miro Gallery

You may not be able to get a ticket to her Infinity Mirror Rooms at Tate Modern until the autumn, but here’s a show of new works by the Japanese icon, featuring paintings, bronze pumpkins and painted soft sculptures. Do check the website though, as it’s likely to be fully booked over the weekend (so you might have to go later). In addition the gallery is presenting an exhibition of new paintings by the peerless Chantal Joffe, including images of her own mother, which considers issues of aging, motherhood and visibility, focusing particularly on the complex relationship between mother and child over time.

For these brilliant new photographs intimately chronicling daily life, the American artist formerly known as boychild took images from the past two years, printed and piled hundreds of stills shot on film and re-photographed them, resulting in the twelve unique, layered pieces here. Basco describes them as being like memory banks in which “everything is touching, rubbing into everything else…dancing and disappearing and reappearing like electrons in an atom, coming in and out of focus...”