'Together in Resonance: How Rave Culture Can Change The World' by Jasper Spires

08 June 2021 At the fringes of Mayfair, a striking pair of artists have built twinned monuments to the power of disruption and heaven shattering kick drums; fresh records to the culture of the rave. Both Kate Dunn and Vinca Petersen’s latest work share in this same subject matter, in capturing an experience of rave culture, after a period in time where it had all but died out. Working under the lingering shadows of Covid-19, each has approached their focus independently, but in taking their separate exhibitions together, an enduring legacy can be found. Between the abstract metaphysics of rebellion, and documenting a life found inside it, new insights into the culture emerge, forming a poignant humanism beneath the wall of speakers. 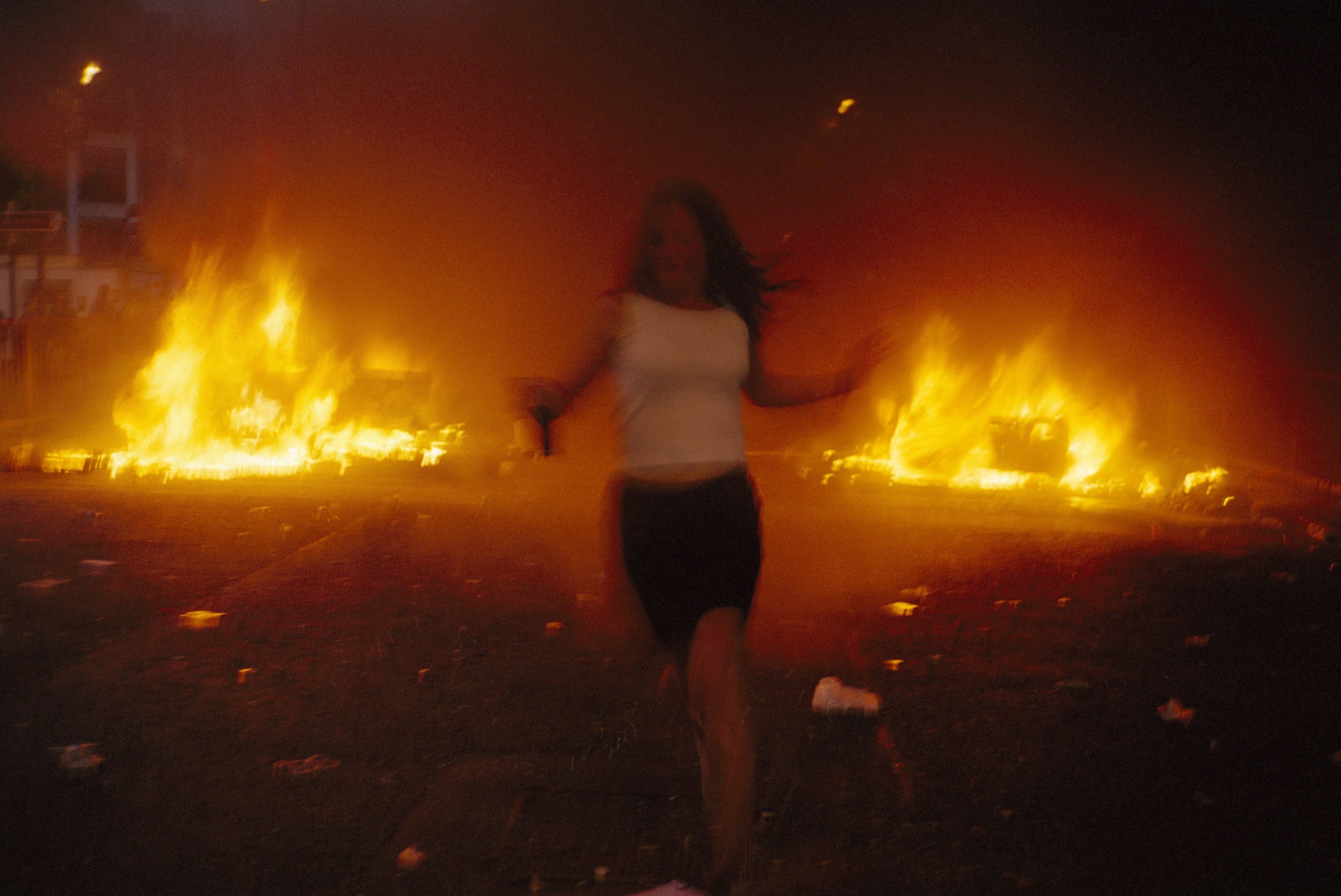 Kate Dunn’s “The Tabernacle: Enter the Pharmakon”, showing at TJ Boulting, straightforwardly places you before the conceptual core of raving, with an ecclesiastical emphasis on its power to lift people out of everyday life. Primarily a performance piece, Dunn’s show orbits three canvassed archways lacquered with a variety of luminescent paints, which magnificently change colour according to alterations in the spectrum of light pooled upon them, and thumping rhythms of accompanying gabber baselines. The aim can be nothing short of hypnosis, of drawing visitors in with repetitive beats that chime with the palpitations of the heart, and propel their gaze through the corridors of glowing colour hung before them. In the room next door sit a myriad of smaller pieces to the same effect, in obsessive and ultraviolet recurrence, like a shrine to the notion of otherworldliness, of crossing the boundary, and slipping out of the dark. Dunn attributes the works’ title to these undertones of religiosity; the ‘Tabernacle’ itself being an object from Judaeo-Christian mythology, as a tent that served Moses as god’s temporary dwelling, and ‘Pharmakon’ referring back to classical Greece, as the term either for poison or remedy. In the context of both, the intent behind the show becomes clear; to muster this same sense of spiritual fervour, that the Florentine-styled archways on the wall might transport the viewer away from the world, across the borders that glow in the dark, and their ultraviolet splatters. It is this movement that the experience brings into relief, of the potential for the rave to string somebody out of their immediate surroundings, to offer a space with different rules and ways of being, in the same manner as religious practice. There are glimmers of the Dionysian Mysteries to the narrative here, holding rave culture as a realm of potential, a raw alternative, whereby individuals can dismantle the old means to life, and methods of power; a force for liberation, and subwoofer vibrations.

However, in order to see what life might be like upon crossing the boundary, falling headlong into the colours, you have to turn to those that have already made the journey, and come back with photos. Vinca Petersen’s “Raves and Riots”, at Edel Assanti, is just such an account; a visual record and selection of memories, from somebody who’s returned from the Pharmakon and brought a new perspective with her. Comprised of fifteen photographs, selected from the many thousands captured on her travels, Petersen’s latest show is precisely what is titled; an assemblage recording the intersection between the two parties. Surprisingly though, very few photos feature the broad focus one might expect in this case; the huge congregations of people, mass raves, or chaotic riots in the thousands. Getting away from such coverage, of the typical kind when tackling these subjects, Petersen’s personal involvement with the each provides a more intimate portrait of those involved, often centring on individuals or small groups and their unique stories. The cheering solitary figure before the flames in “Riot Boy” and the bathers in “River Conversations” are testament enough to this cornerstone: of the concentration on character. This is Petersen’s new perspective, developed under the mechanism abstracted by Dunn throughout her years surfing Europe in convoys packed with speaker sets: an emphasis upon the people involved, under which the boundaries of the old society, the point of origin before the trance, melt away. “Riot Boy” was taken during a Reclaim the Streets rally blocking off a motorway, re-appropriating the space according to what the people desired, and in such a way as might have sociologist Henri Lefebvre shed a tear. The disused industrial spaces of “Warehouse Rave” and “Sleeper II” are captured in transformation from abandoned structures into palaces of celebration. Most profoundly of all, “Riot Cop Kiss” crystallises a dissolution of the social roles of protest, into an amorous encounter between the opposing forces of law enforcement and rebel. From beyond the rules and structures of normalised living, from a place established as their own, Petersen and the culture her work embodies is shown to be the birthplace of a new humanism, of an emphasis of each person, against the blanketing of past ideology. Everything that exists, from the streets to the idea of policing, become re-contextualised according to the people involved, and expressions of their desires and intentions, before any other meaning.

Together, these shows can be experienced within a five-minute walk of each other, and though captivating in their own right, intersect beautifully. United, they proffer the rave as a mechanism to raise the personal towards an intersubjective experience, through vibrations that weld people under one rhythm, and elevate them to the space of new ideas. By setting out an environment through the archway, on the side of rebellion, they give individuals the chance to connect in new ways, and create new means to understand the world; where under the pulsing canopy of the Tabernacle, riots and maddened raves can be seen as the same thing.