16 June 2021 “I left home at 17 and moved into a squat in London,” Vinca Petersen tells DJ Mag during a private view of Raves and Riots, her solo exhibition currently open in central London. “Young kids were able to move to London then because you could go and become part of the squatting community. Then I heard about this rave thing.” 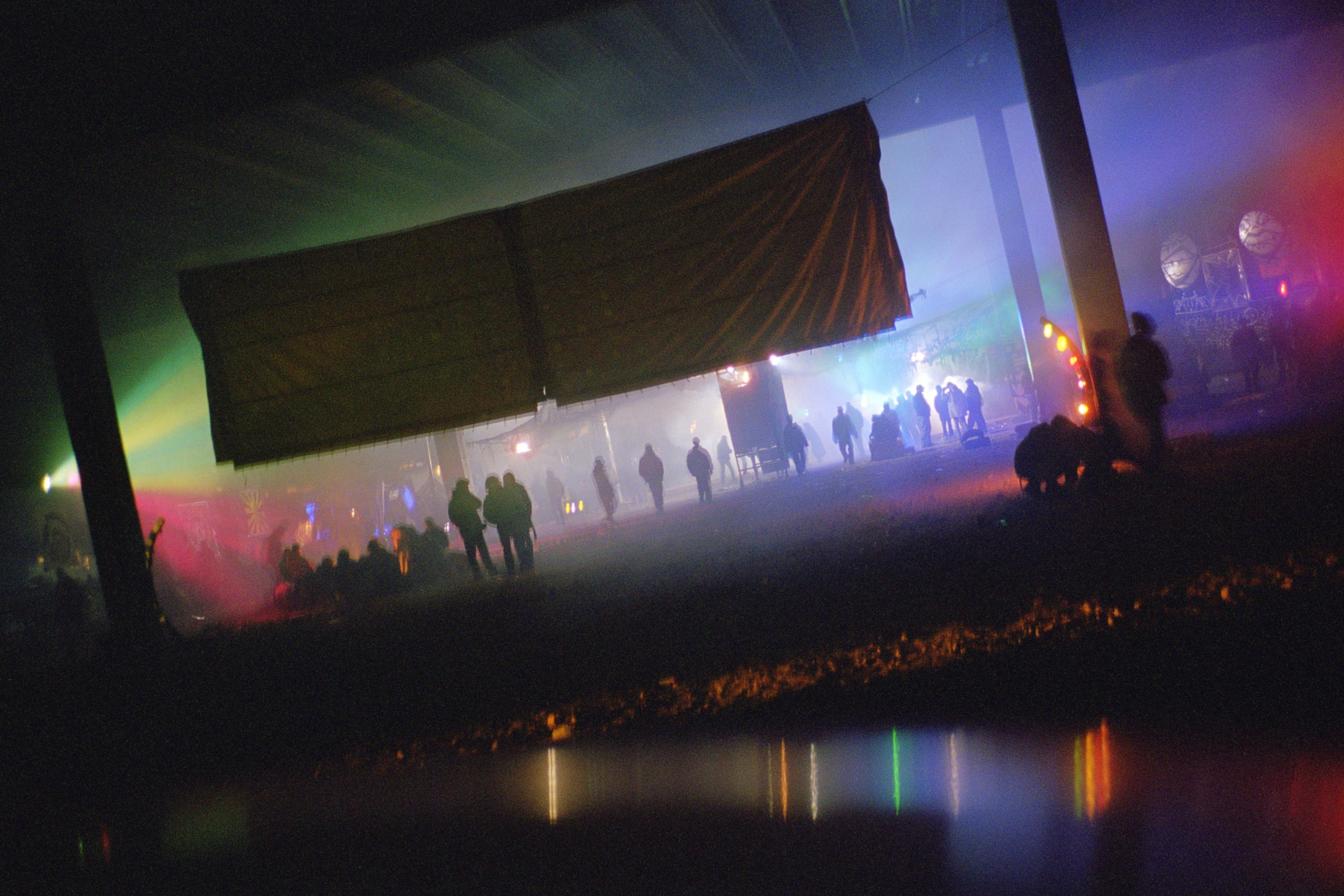 Raves and Riots is a collection of shots from the photographer depicting her formative years, when she travelled the UK and Europe setting up rigs, organising with other free party crewsand protesting Tory-led political oppression. It’s currently featured at Edel Assanti – 46 Mortimer St, London, W1W 7RL – Monday to Friday, until 30th July 2021.

The collection juxtaposes the mix of both the unadulterated euphoria that came with the rave scene — which went on to change the face of youth culture, fashion and music — and the political oppression that came after, as the Tories systematically attempted to dismantle the subculture.

“I first went to one of these raves and I was like, ‘What is this?’ Then I found this whole amazing community in ravers. In 1992, it was Castlemorton [the huge rave that was the last straw for Middle England] — everything kicked off with the police and by 1994 it was illegal to even drive towards a rave, or to be in a group of people listening to repetitive beats.”

DJ Mag asked Petersen to talk us through some of the pictures from Raves and Riots.

“This is the perfect moment when everyone has to leave the site and go somewhere else. All in your trucks, travelling to the next place trying to find somewhere to park — we would say to ‘take a site’.

“I was driving that van at the time, so I just leaned out of the window with my camera and took it. I can’t remember how many crews there were, but I’d been in like 200 convoy situations and I think that’s one of them. Kamikaze and Bedlam sound systems from London were there.”

When you look at this picture, what feelings does it evoke?

“Every minute was so intense and engaging. All you cared about was the next party and the next time that you were going to see your mates. You would go to some of these raves and people were coming down from Birmingham. I had mates in Birmingham, but I’d never have met someone from there unless I went to a party in, like, Wales that I’d driven to from Canterbury or something.”

“It might look to someone now that it’s a bit dark or gloomy, but to me that’s a euphoric photo in a different way. There are people who will have been dancing next to each other for seven or eight hours straight. This is their experience. There are no phone cameras, no nothing, no idea to preserve this moment for another time. They’re just there and they’re in a trance-like state. Absolutely in the moment and having a very personal experience without considering what anyone else is thinking about them.”

Were the DJs a central focus like they are now?

“No, that would have been very uncool for us. All the DJs were always at ground level and hidden behind camo nets. It wasn’t about ego at all, it was about hiding the DJ, forgetting about the DJ and getting lost in the music. It was all about the music.”

“We’d just done a protest; I can’t remember what it was about. I said to my friend, ‘Just go and stand next to that copper.’ And I asked if I could take a photo and he said ‘yes’. Then I said, ‘Go on, give her a kiss.’ And he just did it for one second. Then he turned away, very embarrassed and all his mates said, ‘What the fuck are you doing?’

“It looks like it was the perfect moment, but actually it was just a millisecond. Look, there’s an internet shop in the background — it was the only way that you could get online then, so it was a long time ago.”

Why did you mix protests and parties in this collection?

“I’ve always thought that a protest and a rave are similar in some ways; for whatever reason, you might be protesting something close to your heart — like Black Lives Matter or the poll tax — and you’re feeling very strongly that this is what you should be doing. But there’s a line of policemen trying to stop you and it doesn’t make sense. It’s the same thing with illegal warehouse raves; you’re going there dancing with your mates and the police don’t allow it.

“Collectively, hundreds and hundreds of people in those situations suddenly stop being law-abiding citizens. These are people who wouldn’t normally be [breaking the law]. I think what happens then is you get a very strong sense of your own freedoms. The world isn’t about control, it’s about doing what you believe in.”

“In the winter the soundsystems generally splintered off. In the summer we’d do big festivals together, but in the winter you couldn’t get enough ravers to the party to sustain yourself — we made some money through the bar and selling t-shirts. But new year was the one exception in the middle of the winter, a lot of the soundsystems would come together then. So, we found this huge warehouse outside Milan.”

How did you organise it?

“There was a phone line in London called The Party Line, they would help us. It was a landline that you could ring, and they’d tell you where everyone else was. Or word of mouth or underground radio stations. You could drive into a town, find a spot and say, ‘Where are the travellers? Are there any soundsystems?’ You did get lost a lot; sometimes you would drive around for 12 hours and never find the party. Often.”

“The morning after. That to me is the classic, you know, been raving for two days. You can see the soundsystem in the woods there. That was the typical summer technival [techno festival]. That was the summer when I was trying to decide if I wanted to live on the road or not. The next year I had a Ford Transit [van], I lived on the road on and off for ten years.

“These were my formative years; it was just normal for me. The whole of my 20s was very intense. Sometimes in a good way, sometimes in a bad way — but never boring. That’s what I see, someone who had the opportunity to really live. No regrets, none.”

“This was a similar thing. Just that idea of being completely in the music. Again, it’s day six or seven of a techno party. He’s found a speaker playing hardcore techno. That’s a classic too, the DJ is under the camo net — you’re dancing to the music, not looking at the DJ.”

What were the values of this scene at the time?

“Free music to anyone who wants it. And the right to be together and dance all night and to make as many people experience that as possible. There are still people doing it now. The values are always going to be there; it’s not something we made up — it’s something within us as human beings. Especially young people, when you leave home you look for community. The value of gathering together with like-minded people and dancing, is always going to be there.”

“That was at a technival in Rotterdam, the party had been going on for a week. For me, that’s that classic moment when you would never get that situation anywhere else; the whole dancefloor to yourself and the system playing tunes and you’re the only person there submerged and emerged in the music. It’s an amazing moment; she was probably the last woman standing, then that night it all started again.”

Why do you think people are obsessed with the 1990s, almost to the point of fetishizing it?

“I don’t know. It’s not necessarily my opinion, but people have said to me that it’s just before the [proliferation of] the internet. I can’t see it from their eyes because I was there, but it may be that the internet put a stop to something, and this was the last moment that happened before the whole world became homogenised.”