'Yoshinori Niwa: On the rehabilitation of domination and possession' by Barbara Tomsic

29 October 2021 The exhibition entitled On the Rehabilitation of Domination and Possession by the Japanese artist Yoshinori Niwa features nine artworks in five rooms of the Vžigalica Gallery. The layout of the exhibition space is architecturally interesting, as we move left and right from the entrance area into two seemingly identical rooms. In the context of the exhibition, the left-right movement can symbolise the political division into left and right blocs, East and West, East and West Berlin, formerly separated by a wall, etc. What we have before us is an assemblage of themes that we are confronted with on a global level: political divisions, problems related to the accumulation of waste and unregulated and opaque landfills, problems related to the boundary between private and public and its crossing, questions about past and current political orientations, questions about the politics of the governed, economics, and, last but not least, the individual's relationship to and role in economic-financial structures. In terms of issues, the exhibition is highly complex and multilayered. 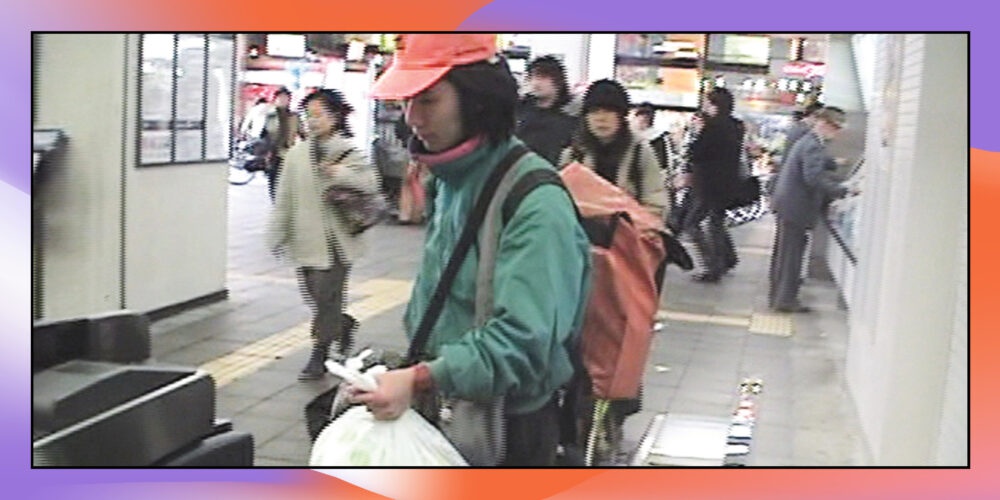 The first work, entitled 'The descent of euro banknotes down the Danube and the search for them as lost objects in downstream countries', raises the question of the meaningfulness of geographical divisions and the question of the relativity of property.

The video Exchange between Turkish lira and euro until the money runs out takes place in a bazaar in Istanbul, where the author exchanges euros for Turkish lira and vice versa until he is left penniless; ironically, all the money changers he visits have a sign saying that they operate without exchange fees. Here we are faced with questions of economic and financial machinations linked to everyday situations such as a visit to the market.

At the same time, we are confronted with the fact that exchange offices do deduct commissions after we visit them in the - usually blind - trust that the exchange will be fair. A similar principle is followed in the next work, 'Withdrawing and depositing at the ATM until you run out of money', where we have the opportunity to examine bank charges, which are also usually overlooked or sidelined because they are a 'necessary evil'.

The fourth work, entitled 'Transferring Puddle A to Puddle B', consists of a wall paper and a video in which the artist transfers a puddle from West to East Berlin with his mouth, across the line where the wall used to divide the eastern and western parts of the city. With this performative action, a major political theme is reduced to the individual and his transgression of borders in a symbolic way.

The work Selling the naming rights to the rubbish heap is presented as a video documenting the performative artistic action, a contract with a waste disposal company and a wall sticker with instructions and a description of the action. The idea seems fantastic in its complexity: first there is the question of mass production, then the economic system in which the individual is given the opportunity to symbolically acquire (earn), then the accumulation of material things, their ownership and disposal in a landfill, i.e. expropriation. Here the author plays with the principle of the online auction, the possibility of leasing land in a landfill for a certain period. In this way, the viewer is brought back to the starting point of the pursuit of material goods. At the same time, it makes him aware that he is responsible for them even when they no longer serve their purpose. On the other hand, it confronts us with the fact that we are all littering, thereby taking individual behaviour to a global level.

One step further brings us to the last work in this space, I'm going to San Francisco to throw away my rubbish, a video in which the artist travels from Tokyo to San Francisco with a sack of rubbish. It is a seemingly absurd project in which the author finds himself in everyday situations with a bag of rubbish in his hand, while never raising any particular eyebrows when confronted with a series of airport checks. Once again we are confronted with the issue of mass production of waste and its (self-evident) disposal and expropriation.

In the left-hand room, visitors are confronted with two major themes. These are Nazism and Stalinism. Nazism is dealt with in the work Adolf Hitler's Retreat from Private Spaces, consisting of a video and a container for collecting objects from Nazi history, which was placed in the centre of Graz during the festival. The work was commissioned by the Steirischer Herbst Festival in 2018. The video presents talks and interviews on the same topic. Stalinism is dealt with in the work Searching for Vladimir Lenin in Moscow Apartments, which is presented in the form of a three-channel video installation. The footage shows Muscovites recounting memories related to Lenin, followed by scenes of the search for Lenin in apartments, modelled on ideologically motivated house searches, and of people walking through the streets of Moscow with a statue of Lenin in their hands. In a sense, the third part acts as a provocation - for some, the appearance of Lenin in public may still be problematic - but at the same time, the remoteness of this part of history makes it more appropriate to speak of (engaged) performance in public space. Following Fukuyama's idea of the end of history after the Cold War, represented by the global establishment of capitalism and liberal democracy, we can look from a critical distance at the last work on display, entitled Towards a Beautiful Land, which, with its neon sign, problematises propaganda, nationalism and ideology, themes that the artist blames on the politics of his own country, Japan.

It is with this last work, which thematically relates to the country of the artist's origin, that the exhibition comes to a kind of meaningful conclusion. For after searching for lost banknotes along the lower Danube, exchanging them for local currency in Turkey, withdrawing and depositing money at ATMs everywhere, crossing the symbolic walls between the eastern and western parts of Berlin, buying the right to name a pile of rubbish in an abandoned illegal landfill in the Philippines, travelled from Tokyo to San Francisco to dump a sack of rubbish, rummaged through the Nazi past in Graz, and searched the streets of Moscow for Lenin and the symbols associated with him, he must nevertheless stop at home in Japan and say something, however indulgently, in neon, about the socio-political order.

The exhibition reveals situations that we take for granted, but at the same time confronts us with facts from semi-past history, each time taking us along the path of the concept of "the individual against the system" to humour and irony. The central sequence of the domination of the ruling structures that we take for granted and the smallness of the individual in relation to them makes us think seriously, especially when we are confronted time and again with the absurd situation in which the author places himself. Interestingly, he always goes one step further and develops projects out of a seemingly absurd situation, which take place in public spaces with random passers-by, in real everyday situations, taking into account the current political-economic situation. By documenting these situations, the artist holds up a mirror to them, which in turn invites us to question the visible and invisible structures that seem to be taken for granted.