Noémie Goudal in The Art Newspaper

15 October 2021  Focus is the section of Frieze London dedicated to younger, more fringey galleries. With a more open structure than the main fair, it tends to privilege media that are less common in the more blue-chip presentations, such as film and video. There is much experimental work among the 35 exhibitors, but the abundance of painting elsewhere in the fair carries through here too. Frieze London’s artistic director Eva Langret’s commitment to bringing new voices to the fair has borne fruit in this section: 13 of the galleries are new to Frieze, including three in this selection of highlights: Addis Fine Art, Copperfield and Edel Assanti.

Goudal is interested in paleoclimatology, and her film Below the Deep South (2021) and the related photographs here explore the notion of “deep time” in relation to the climate emergency. They are part of a new multi-faceted project called Post Atlantica. The video, installed on a vast LED screen, unravels across 11 and a half minutes, and features a series of images of landscapes, shot by Goudal in various locations across the world, being consumed by fire, layer by layer. Goudal plays with perception, with truth and fiction in the photographic image—as is revealed dramatically in the final moments of the film (no spoilers). 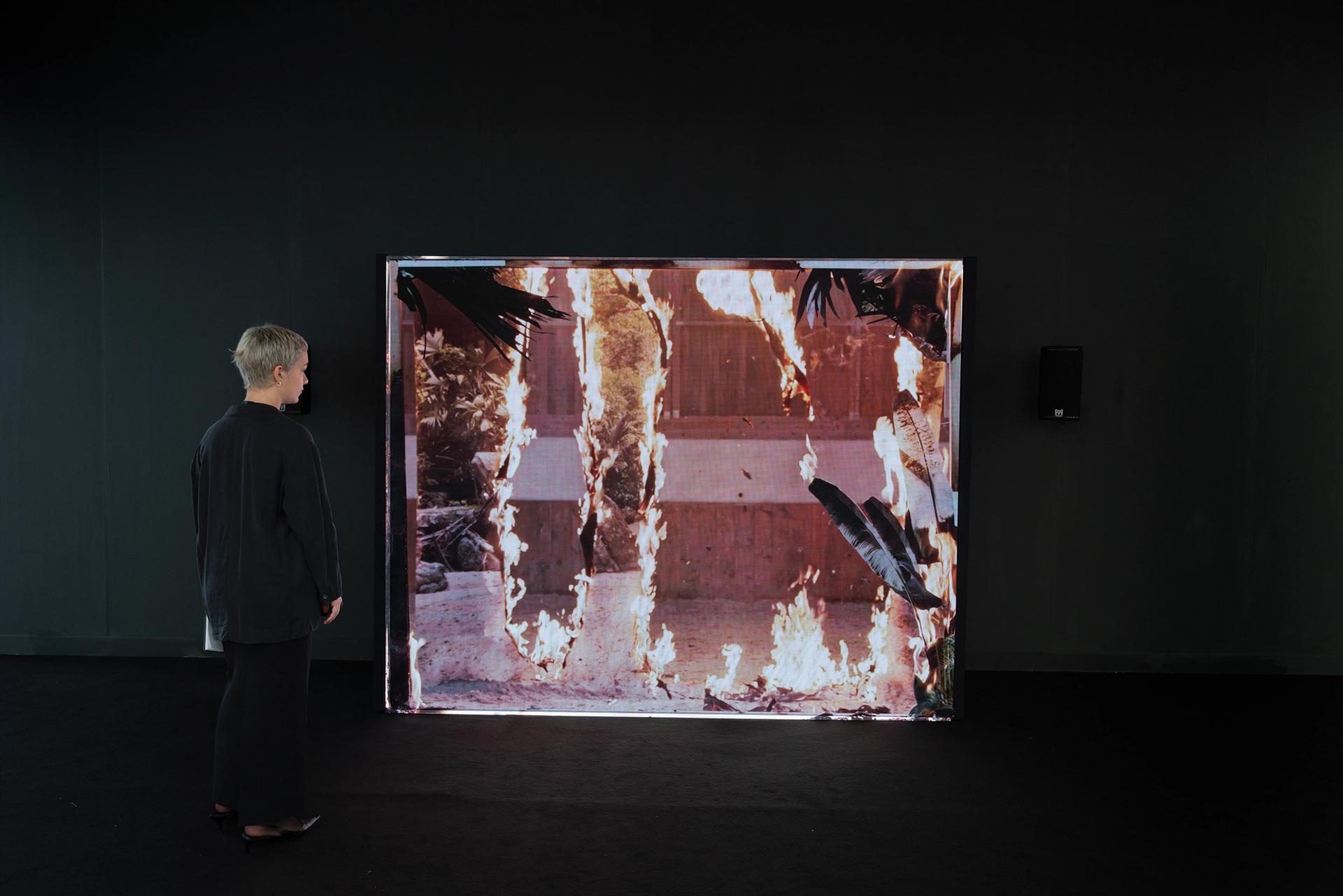 Calel’s work, The Echo of an Ancient Form of Knowledge(2021), has been acquired by the Tate galleries through the annual Frieze Tate Fund—or rather, Tate has become the piece’s custodian, since Calel sees these stones, and the fruits that sit on them, as altars and a “sacred site for rituals”. Calel, who is Guatemalan, explores the Indigenous experience through the beliefs and practices of his Mayan Kaqchikel heritage. What is likely to be viewed by most Frieze visitors as an installation is in fact an offering to his ancestors. Both in the Tate acquisition and the very act of displaying the piece at the fair, Calel challenges us to consider the complexities of Indigenous cultures and the ongoing effects of their destruction.

In her More Girlfriends paintings (all 2021), Fourchy takes images of notable performers, including Charlotte Gainsbourg, Isabelle Huppert, Divine and Anjelica Huston, and sets them within bold, patterned spaces. Fourchy, who is based in New York, was taught by the American artist Wayne Thiebaud and her paintings surf the outskirts of Pop as well as nodding to Sigmar Polke, Henri Matisse and others. The collage-like feel of the paintings is enhanced by Fourchy’s use of oil and enamel paint, lending a distinctive texture and sheen to areas within the composition, where Fourchy’s protagonists loom into focus or are abstracted almost to illegibility.

Berhanu’s paintings are difficult to pin down. Born in Addis Ababa in Ethiopia but now based in Maryland, she evokes the rupture of her emigration to the US in compositions that hint at figurative presences, still-lifes and landscapes but never resolve into a clear singular narrative. There is a sense of the micro meeting the macro, with cellular forms abutting those resembling geologic maps. Occasional clear references to bodies and animals—feet, cows and horses—are set amid abstract forms. It is this rich ambiguity, an enigmatic dreaminess, that makes Berhanu’s work so absorbing.

Whittle was born in Bridgetown, Barbados, and now lives between there and Glasgow. Her works explore that personal background through a complex web of references to Caribbean and African history and ritual, with rich allusions to literature and performance. Here, a constellation of bronze casts of Whittle’s tongue map the stars in reference to Caribbean Indigenous communities’ use of the firmament in maritime mapping and agricultural practices. A new film takes a characteristically collage-like approach to Atlantic histories, with elements of choreography and Whittle’s soothing voiceover—“Remember to soften,” she counsels. Meanwhile, a deceptively colourful sculpture alludes to the origins of the limbo dance in slave ships.

This stand brings together two artists investigating histories of colonialism and museum collections who are about to show their work in august European institutions: Baloji at the Uffizi in Florence and Cherri as artist-in-residence at the National Gallery in London. Baloji’s works in bronze and acrylic paint on paper investigate the global trade in textiles in the historic Kongo region, now part of the Democratic Republic of Congo, Angola and Gabon. They inevitably refer to another historic trade: slavery. Cherri’s vast totems and small figures bring together found and made objects to explore the distinctions in the classification between nature and culture, and the underlying social, historical and museological implications.