Sheida Soleimani in the Brooklyn Rail

'Sheida Soleimani: Medium of Exchange' by Matthew Biro
Open a larger version of the following image in a popup:
Share

05 June 2018 For Rosalind Krauss, the pivotal difference between Dada photomontage and Surrealist photography had to do with the relative presence of either the photographer or the world in the image itself. Surrealist “photographs are not interpretations of reality, decoding it, as in Heartfield’s photomontages. They are presentations of that very reality as configured, or coded, or written.”1 The obvious cuts and jarring juxtapositions of the Dadaists, in other words, distanced the spectator from the photographs’ indexical sources, an alienation that allowed viewers to perceive their images as conceptual statements about the world: subjective, allegorical interpretations of social and political tendencies. The Surrealists, on the other hand, largely eschewed photomontage, opting for other techniques of doubling or defamiliarizing the image, manipulations that preserved the physical world’s presence, while at the same time allowing it to appear as mysterious or uncanny. Dada photomontages thus foregrounded the presence of the artist (or cultural producer), and the interpretive—or even partisan—nature of the image; while Surrealist photographs emphasized the presence of the world (and the subjects within it), albeit one that was written or coded, permeated by meaning.

As suggested by Medium of Exchange, the latest project by Iranian-American artist Sheida Soleimani, Krauss’s distinction between the Dadaist and Surrealist approach to photography—viewer alienation (and the concomitant emphasis on the conceptual nature of the image) or mystery and uncanniness (with its stress on the polysemy of the world and the people within it)—no longer makes much sense; at least, when used to examine the work of radical artists like Soleimani. A series of photographs, videos, and print publications, Medium of Exchange is based on intense research that the artist conducted into the relationships between the U.S. and OPEC nations since 1960, when the organization was first formed. Largely relying on appropriated texts and images, the project presents documentary evidence pertaining to war and the oil trade in the Middle East, Africa, and South America. The resulting images and scenes, nonetheless, are wildly fantastic: absurd reconstructions or re-imaginings of the real. Different iterations of the project, which began in 2016, have recently appeared in Cincinnati, Atlanta, and will appear in July in New York, at the CUE Art Foundation. Sometimes, just the photographs are presented; in other installations, it’s only the video that is playing. The black-and-white publications, which intermix screen grabs from the video and reproductions of Soleimani’s photographs and combine them with their written and visual documentary source materials, provide an additional conduit through which the artist meets her public. But in all of these configurations, Soleimani explores the impact of political and economic power on the body, reimaging abstract relations through uncanny, allegorical personifications. 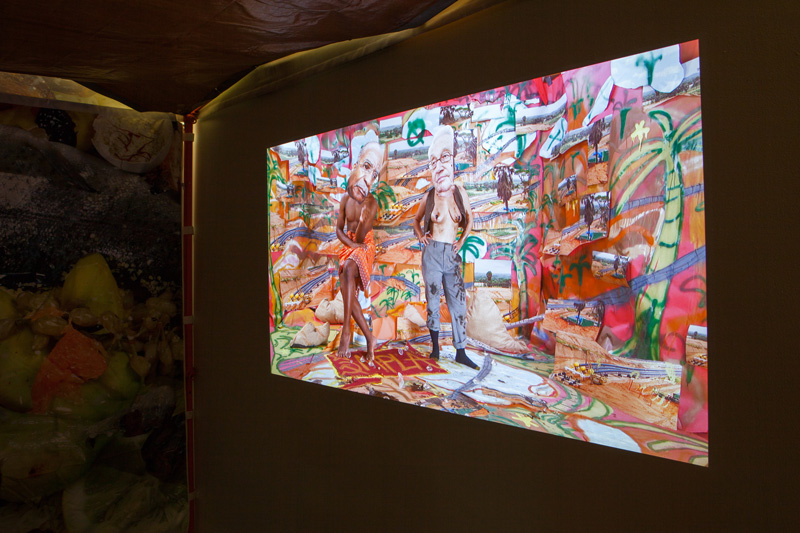 In Atlanta, nine freestanding 60 × 40 inch photographs—supported by custom-made oil-can frames—presented a twisted history of the U.S.-OPEC relationship. Most of them depicted tableaus in which one or two figures—actors wearing photomontage masks bearing the stitched-together visages of assorted government officials—interacted within a photo-sculptural environment. In one, Dick Cheney, wearing only a $100-bill towel and a baseball cap holds hands with the only slightly more dressed Donald Rumsfeld: half-human, half-photographic lovers, canoodling in a gridded environment of repeating pipelines, explosions, and Halliburton insignias. In another, a bare-breasted Henry Kissinger, on bended knee, raises an oil-smeared diamond ring to the partially nude José María Botelho de Vasconcelos, Angola’s Minister of Petroleum. Soleimani’s political targets are also clearly hybrid—their bodies mix gender and race, and their sexuality seems to flow in normative as well as non-normative directions. More than just emphasizing sexuality, however, the actors’ poses foreground relations of domination and submission, while the environments in which they exist reference war and oil production.

Like John Heartfield, the Dada artist turned communist cultural producer, Soleimani disrupts political and economic power through appropriation, photomontage, and irony, creating visual allegories that both document and criticize official agents and events. But much more than Heartfield, Soleimani emphasizes the indexical presence of her subjects by using live actors in conjunction with photomontage masks and a photo-sculptural, prop-laden environment. Thus, while at the same time she continues Heartfield’s emphasis on the interpretive nature of the constructed image into which appropriated reports and other forms of documentary evidence have been fitted, she makes her photomontages seem more physical and as a result her allegories of power become even more perverse.

This powerful “critical perversity” can be seen in the bizarre eroticism of many of Soleimani’s configurations, as well as in how strongly her tableaus resist and subvert the primary ruling pieties that govern today’s social, political, and economic world orders. The project’s first video, Medium of Exchange (2018) which premiered in Cincinnati, demonstrated this as well: it focused on sex and violence, while dismantling clear distinctions between gender, race, and class. Throughout the thirty-two minute video, a scene repeats in which two sets of masculine hands play a violent game of Slapjack with a pack of Iraq’s Most Wanted playing cards. Depicted in bird’s-eye view, their game is set against a photomontaged tabletop consisting of fragments of a checkered picnic cloth mixed with images of fires, desert, and U.S. military compounds during the 2003 Iraq War. On the audio track, a child reads military correspondence about food policy on U.S. bases; and as the game progresses, the actors’ hands, cards, and table surface became occluded with black viscous oil. Intercut with this increasingly obscure game, a number of live action tableaus appear in which the same political figures that star in the large-scale photographs speak to one another in dialogues appropriated from declassified military documents, political dispatches, and documentary news sources. Acting out scenarios that evoke both love and hate, attraction and repulsion, the actors become integrated with one another and the environment through erotic contact as well as by means of flowing substances like oil, candle wax, and runny ice cream. Repeatedly drawing parallels between sexuality and consumption, the video integrates the living with the photographed body to create an uncanny mixture of identification and alienation.

The Medium of Exchange video is the first in a series of approximately fourteen films, according to the artist. Whether this series will reach completion or not remains to be seen. But what is already clear from Soleimani’s complex multimedia project is that our bodies lie at the center of multiple and conflicting symbolic systems, complex networks of representation that can either liberate or enslave. By embracing both alienation and seduction—the Dada and the Surrealist photographic traditions, as it were—Soleimani proves that radical art remains possible today, a practice she conducts as a type of formally and materially complex investigation that is deeply aware of history but imagines an alternative future.

MATTHEW BIRO is Professor in the Department of the History of Art at the University of Michigan. He is the author of Anselm Kiefer and the Philosophy of Martin Heidegger (1998), The Dada Cyborg: Visions of the New Human in Weimar Berlin (2009), and Anselm Kiefer (2013). His reviews of contemporary art, film, and photography have appeared in Artforum, Contemporary, Art Papers, and The New Art Examiner.