01 May 2020 Geopolitics. If a single word summarises the theme of Gordon Cheung’s latest series of works (all 2020) on display at Edel Assanti in London, that would be it. In the single-room exhibition Tears of Paradise, a large hanging installation and five equally sized paintings-cum-collages confront us with the major infrastructural initiatives in China that represent the foundation of Xi Jinping’s “Chinese dream” of global hegemony. The scale of these developments is unprecedented in human history and simply unfathomable for most people, especially those of us living in the west. 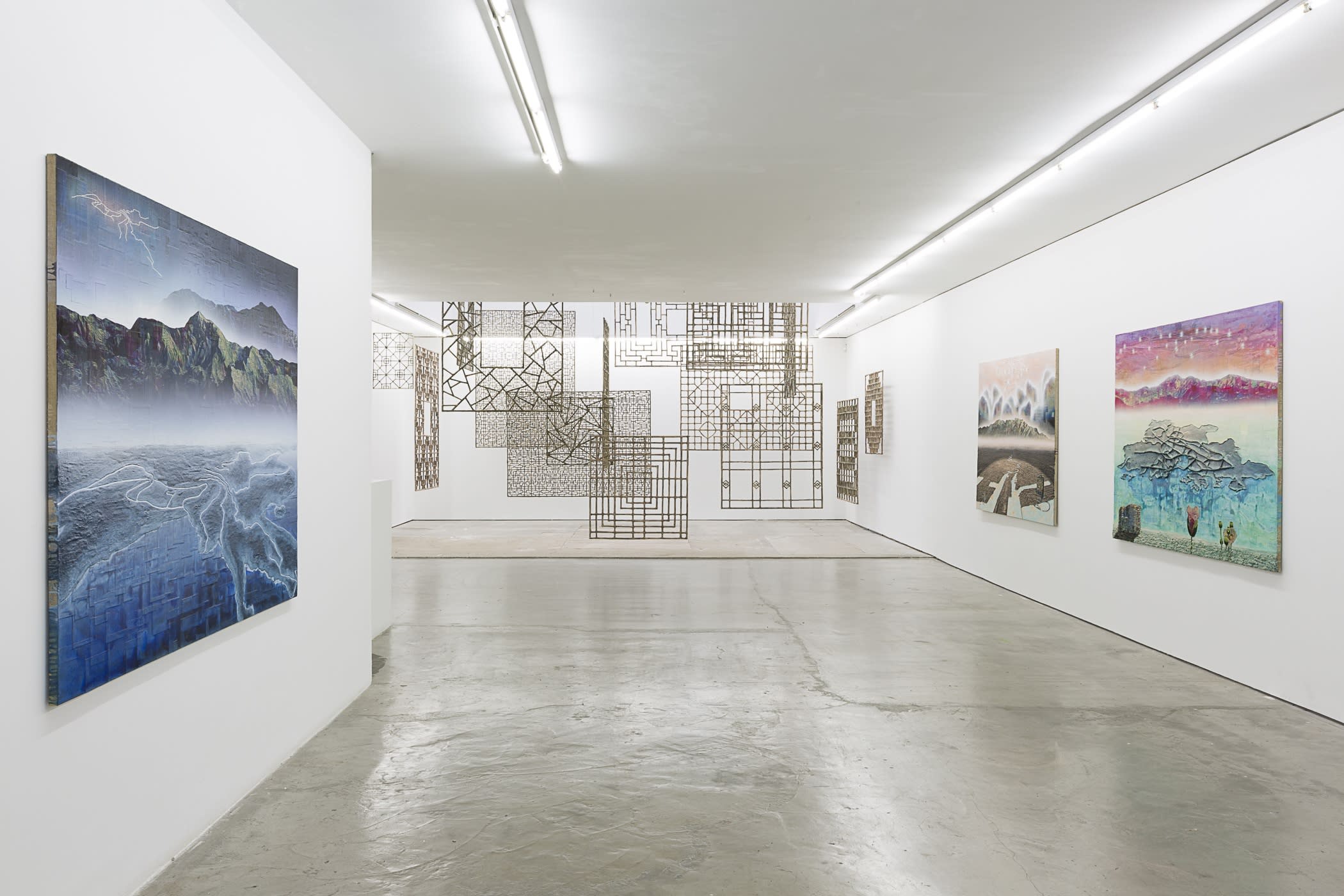 Three works that deal with hyperconnectivity – bringing people and goods closer together than ever – hang side by side on one wall. The first is String of Pearls, a map of the coastal countries along the US$1 trillion Belt and Road Initiative. Its key hubs and ports appear as luminescent jewels that shine with the promise of direct trade routes between China and more than 70 countries across Asia, Africa and Europe. The third is Megalopolis, a close-up of the sprawling Greater Bay Area, where the planned consolidation of 11 cities under a unified administration will soon form the most highly populated agglomeration in the world, at a towering 70 million-plus inhabitants.

In the centre, the title painting Tears of Paradise juxtaposes the Opium Wars, symbolised by poppy flowers blooming in the foreground, and the current plans for the new railway network in the GBA that will, by 2030, reach a total length of 1,890 km and connect all major regional cities to Guangzhou in under an hour. The historical events that led to the Century of Humiliation are here superseded by the contemporary innovations that are intended to overcome it.

Tears of Paradise, installation view, 2020. Courtesy the artist and Edel Assanti, London. Photo by Will Amlot.

I chanced on the London-based artist during my visit to the gallery, and over the course of an hour, he spoke of each of the scenes in nuanced terms without any of the cynicism that many have attributed to his treatment of the subject matter. He was instead in awe of a nation’s ability to achieve such incredible engineering feats and, at the same time, saddened by the difficult truth that with every advancement on this scale comes huge sacrifice.

Towers of Water and Desert of the Real, shown together on the opposite wall, are explicit commentaries on the negative impact these developments can have on a local level.

In Towers of Water, the rivers that cross the Tibetan Plateau look electrically charged, alluding to the growing numbers of dams – already in the tens of thousands – being built to supply China with hydropower. Sadly, these sources of renewable energy destabilise ecosystems, displace entire communities and drown cities in the process.

In Desert of the Real, settlements in northwest China’s Xinjiang region, home to the Uyghur Muslim ethnic minority, are framed by a monumental poplar tree, a traditional building from the Xinjiang city of Kashgar and a modern bridge. Officially described by the Chinese government as re-education camps to combat terrorism and maintain peace in one of the busiest intersections along the Belt and Road due to its proximity to Kazakhstan, Kyrgyzstan and Russia, these settlements are in fact sinicisation centres where millions of people are detained and indoctrinated.

Tears of Paradise, installation view, 2020. Courtesy the artist and Edel Assanti, London. Photo by Will Amlot.

Cheung has borrowed codes from sci-fi, the Romantic sublime and traditional Chinese landscape paintings to produce five equivalent compositions, each containing, from the bottom up, the human scale (singled-out motifs like buildings and boats), the harnessed land (built infrastructure), the divine (sacred mountains) and the near future (planned developments). The works are layered visually, but also in their making and meaning. Small rectangular cut-outs from financial newspapers, combined with acrylic and sand, are pasted across the canvases in a visual patchwork reminiscent of a desktop saturated with open apps and browser windows. Today, technology, big data and capitalism are the backbones of economic and political growth.

Financial newspapers are employed again as the primary medium for Home, the large installation suspended on bamboo rods under the skylight at the back of the space. The 30 traditional Chinese window frames represent the boundary between the interior and the exterior, the private and the public, and the home and the city. They stand in as the final frontiers between the old and the new, looking out onto a future that can only come into existence through destruction. They ask us to consider the point at which individual sacrifice is expected for the progress of a whole nation.

Are the sacred mountains watching over or looming? Are the colours vibrant or toxic? Are the glowing lights guides or warnings? It’s these ambiguities that preclude placing Cheung in the camp of advocate or detractor; he is a witness rather than a critic. These tears of paradise, are they tears of joy or tears of pain? Are they ruptures? It would seem that in all utopias is a dystopia that can be seen through the cracks.