06 July 2021 At Harlan Levey Projects, the artist draws on his own experience as a working-class football fan during Poland’s 1990s passage from communism to capitalism. 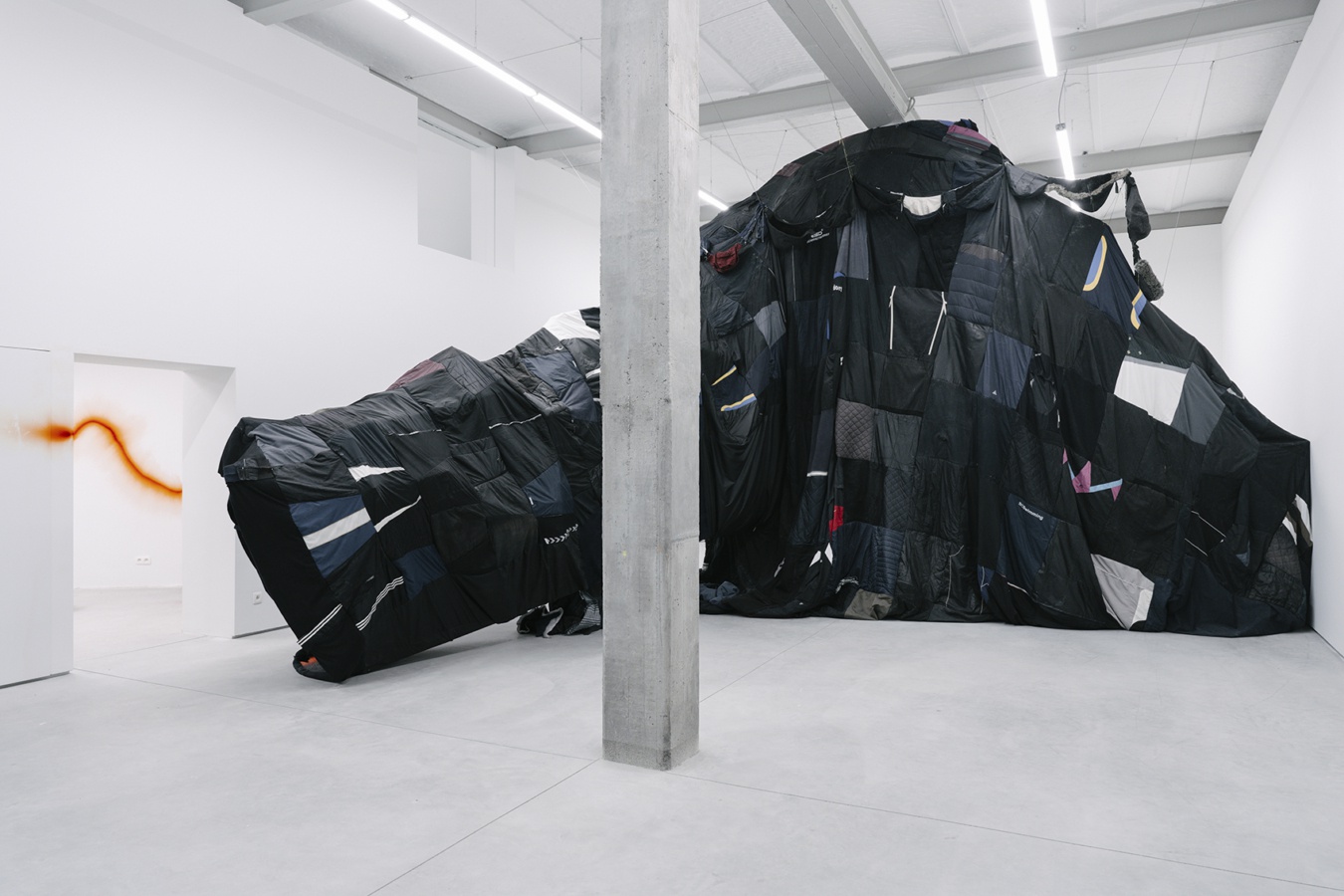 The Chaotic period that followed Poland's transition from communism to capitalism is an important thematic backdrop to Marcin Dudek's exhibition 'Slash & Burn II' at Harln Levey Projects's new space in the Heyvaert district of Brussels. In this powerful show - which comprise installation, drawing and performance - the Polish artist explores his own experience of coming of age in the 1990s as a working-class football fan in a country with crumbling infrastructure, dysfunctional governance and a traumatic history of being caught in the crossfire of successive European conflicts.

More than 300 bomber jackets, deconstructed and meticulously stitched together, form the installationInspire.People.Motion (2021) at the gallery’s entrance. Part of the uniform of the ‘Jude Gang’ – the hooligan football firm to which Dudek belonged from 1993 to 1998 – the bomber jacket is a recurring visual motif throughout the show. Seven meters high by 20 meters wide, Inspire.People.Motion resembles an enormous black and blue igloo and incorporates a long low tunnel with a sloping ramp that guides visitors to the top of a small set of stairs. This, in turn, leads to a trio of collages titled Passage (2020), Passage II (2020) and Passage III (2021). In her eponymous essay, the writer Amanda Sarroff likens this movement through the installation to both Poland’s passing from communism to capitalism and to Dudek’s own progression from adolescence to adulthood, hooliganism to artmaking. Painstakingly built up from thinly cut strips of surgical tape – a choice of material that hints at the therapeutic function artmaking holds for the artist – the collages figure a visual narrative in which the bomber jacket, as a symbol of Dudek’s past, is once again deconstructed. Here, it is depicted in a state of advanced decomposition, before being set aflame and, finally, totally disintegrated.

In the adjacent room are the remnants of an untitled performance that Dudek conducted with an orange flare at the exhibition’s opening. The meandering line traced along the walls looks like spray paint but, upon closer inspection, exhibits a faint purple tinge along its contours from where the flare’s smouldering pigments burnt into the wall. It also snakes across Tablica (2021), a tryptic with hinged panels that unfold like a 15th-century altarpiece. When open, the work reveals a grid of images that increase in size from top to bottom. Comprising portraits of childhood friends, redacted legal documents and architectural drawings of football stadiums and prisons, together they constitute a sort of personal archive of the prosecution of the artist’s former football firm by the Polish authorities. Dudek’s brother served jail time for his involvement in the group’s illicit activities and each of the 200 or so images bears a number corresponding to one day he spent behind bars. Standing in the centre of the installation – which, when angled at 90 degrees, replicates the dimensions of Dudek’s brother’s cell – one can’t help but be struck by the tragic path that led so many young men to prison, or even to an early grave.

Dudek’s work is neither a glorification nor a denunciation of hooliganism: there is no moralizing subtext. Rather, ‘Slash & Burn II’ is the artist’s musings on his good fortune at having escaped his upbringing through art. Within this context, his use of soft or intangible materials, traditionally coded as feminine, could be read as a parable for his ‘redemption’ from ritualized male violence by enacting the opposing manual rituals. Despite the specific political and historical context from which they emerged, however, the story of delinquency, escape and redemption posed by these works could come from anywhere. It is this rare display of universality that allows the exhibition to transcend language and history, packing a powerfully cathartic punch.